An unused, new, extra roomy sized all cotton yukata. Yukata are summer weight, casual kimono that can be worn with a light cotton juban underneath for cool airy comfort. These are extra roomy so will fit western frames nicely. It’s perfectly ok to wear cotton T shirt and cotton  capri leggings underneath as well tho!

A beautiful pattern of stylised flowers and sayagata in black red and yellow on a white ground.

While this is a women’s yukata, I feel anyone could wear this if they have flair!

These measure 163 cm long, 67 cm from sleeve edge to centre seam, and the sleeve drop is 49 cm

• Yukata: Cotton Kimonos without linings worn as bathrobes or as casual clothes for the summer.

Yukata are worn by men and women. Like other forms of traditional Japanese clothing, they are made with straight seams and wide sleeves. Men’s are distinguished by the shorter sleeve extension of approximately 10 cm from the armpit seam, compared to the longer 20 cm sleeve extension in women’s. A standard yukata ensemble consists of a cotton undergarment (juban), yukata, obi, bare feet, sandals (geta), a foldable or fixed hand fan, and a carry bag (kinchaku). Kinchaku are used by both men and women to carry cellphones and other small personal items. For men, an optional hat may also be worn to protect the head from the sun. Yukata literally means bath(ing) clothes, although their use is not limited to after-bath wear. They are a common sight in Japan during the hot summer months.

Traditionally these were mostly made of indigo-dyed cotton but today a wide variety of colors and designs are available. As with kimono, the general rule is that younger people wear bright, vivid colors and bold patterns, while older people wear dark, matured colors and dull patterns. A child may wear a multicolored print and a young woman may wear a floral print, while an older woman would confine herself to a traditional dark blue with geometric patterns. Men in general may wear solid dark colors. Since the late 1990s, they have experienced increasing popularity.

Yukata are worn at outdoor summer events such as hanabi (fireworks) displays and bon-odori festivals. They are also worn at traditional Japanese inns (ryokan), especially after bathing in hot springs (onsen). 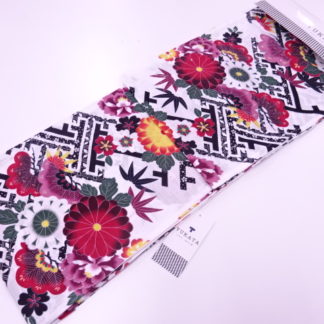