This is a gorgeous obi in excellent condition, and measures 412 cm by 30 cm wide. It is a fully patterned obi, the reverse side being plain black satin silk.

• Fukuro obi (袋帯 , “pouch obi) is a grade less formal than a maru obi. It is the most formal obi actually used today. It is made by either folding cloth in two or sewing two pieces of cloth together. If two cloths are used, the cloth used for the backside of the obi may be cheaper and the front cloth may be, for example, brocade.

When worn, a fukuro obi is almost impossible to tell from a maru obi. Fukuro obi are made in roughly three subtypes. The most formal and expensive of these is patterned brocade on both sides. The second type is two-thirds patterned, the so-called “60 % fukuro obi”, and it is somewhat cheaper and lighter than the first type. The third type has patterns only in the parts that will be prominent when the obi is worn in the common taiko musubi. 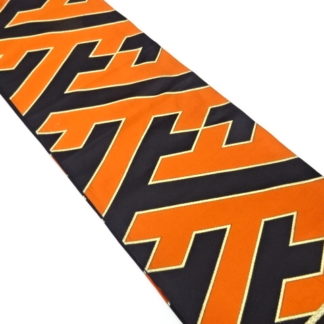