A beautiful wool blend (97% wool, 3% nylon) fabric with a printed sashiko style pattern in sayagata, shippo, asanoha and more that can be used as it is or even better, for your own sashiko project such as cushion covers or bags. A pretty poppy red orange colour makes this an unusual ground for sashiko and well worth a look!

The fabric is 37 cm wide and is sold by the metre. It is in excellent condition save one very tiny hole at the 1.85 metre mark.

• Asanoha: The Asanoha pattern is one of the most popular traditional patterns often seen on Japanese kimono.  Asanoha means: Asa = hemp: no = of: ha = leaf. The regular geometric pattern, though abstract, represents overlapping hemp leaves. Asanoha can be combined with other seasonal motifs including ume and kikko, or feature as the primary element of the design. In ancient Japan, hemp, along with ramie, linden, elm, wisteria and mulberry, were used for making clothing, fibers and paper.

The wives of merchants would wear it, to bring good fortune to the wearer. Because hemp was known for its rapid growth, the pattern was often used for clothes of newborn children. “…[p]arents hoped that infants wearing it would develop with the vigor and toughness of the hemp plant.” The Book of Japanese Design, Kyusaburo Kaiyama.

• Sashiko: Literally, “little stabs”. A form of decorative reinforcement stitching (or functional embroidery) from Japan. Traditionally used to reinforce points of wear or to repair worn areas or tears with patches. This running stitch technique is also often used for purely decorative purposes in quilting and embroidery. The white cotton thread on the traditional indigo blue cloth gives sashiko its distinctive appearance, though decorative items sometimes use red thread.

• Sayagata:  the swastika is often found as part of a repeating pattern. One common pattern, called sayagata in Japanese, is made of of interlocking manji/swastikas, left- and right-facing swastikas joined by lines. As the negative space between the lines has a distinctive shape, the sayagata pattern is sometimes called the “key fret” motif in English.

• Shippō (also shippou, shichihou, nanatsutakara) (lit. seven treasures) is a design derived from cloisonne work in which a metal object is carved in high relief and the removed portions are filled with colored enamel. The seven treasures are a traditionally Buddhist concept. The earliest appearances of shippō on textiles are preserved at Shousouin and date to the Heian period. During the Edo period it became more common to combine shippō with other motifs and it became popular as a motif on women’s kimono.

Shippō is an auspicious design and is therefore non-seasonal. However, it is often featured on kimono that are to be worn in times in which one would want good luck, such as weddings, children’s kimono for Omiyamairi and Shichi-go-san, and new years. 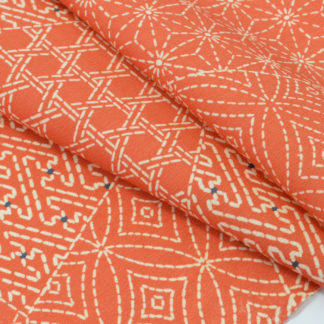