This piece dates from the late 20’s to late 30’s, and is in excellent condition given the age. There is one small stain on one sleeve (see photos) but this can likely be dry cleaned easily. I have successfully removed similar stains using a local dry cleaner. Aside from that one small mark it is in fine condition to wear.

It measures 107 cm long, 64 cm from center seam to sleeve edge, and the sleeve drop is 64 cm. this is a rather generous size for a haori..

• Haori: A kimono shaped jacket, designed to be worn on top of a kimono. Originally worn by men only; women were allowed to wear them after the Meiji era and women’s ones became all the rage in Taisho era (1912-1926). Haori are versatile garments, as they translate well into western-world outfits too, looking good when worn either dressed up for the evening or dressed down with jeans

• Meisen: Meisen silk, generally crisp and supple, is one of the Japanese silks fabricated by weaving pre-dyed threads, utilizing the tie-and-resist ikat technique (ikat is an Indonesian term widely utilised to refer to this technique).

In this process, the threads, silk or cotton, are first stretched on a frame. Selected design areas are tightly bound to prevent the dye from penetrating and the hanks of threads are immersed in the dye pots. The bound portions of the yarns resist the dye and when woven, as a result of the threads not being perfectly aligned, create shapes with charmingly uneven edges.

Other Japanese textiles that are made with variations of this technique are cotton kasuri,omeshi silk and tsumugi silk. (described below).

Meisen silk was a popular fabric for casual kimono from 1910 to 1950, in part because it was more affordable, and in part because the designs, frequently drawing on Western influences, seemed adventurous and innovative. Even today they retain a contemporary sensibility.

Taisho is Japan’s Jazz Age. Can it be summed up in a phrase? It often is:ero-guro-nansensu — eroticism, grotesquerie, nonsense.

The term “Taisho Roman” refers to the cultural stylings of the Taisho Period of Japanese history (1912-1926), combined with the shortened form ‘romantic’. An appropriate English translation might be “romantic vintage”.

In terms of wafuku, Taisho Roman often begins with Taisho-era kimono, or kimono that have similar visual cues, such as bright colors and/or large, bold designs. The kimono is then heavily accessorized with elements of Western fashion from the 1920s, and occassionally touches of the 1910s or early 1930s. 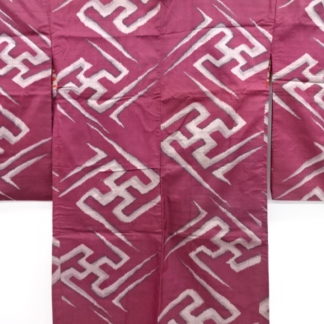