Unused synthetic kimono fabric with a printed pattern of camellias in a manji shape, with a black background and lovely green, red-orange, yellow and white flowers.

This is an unused kimono bolt that you are buying by the meter. It is a synthetic blend, Acetate 90% / Nylon 10%.

This fabric is 36 cm wide. It is soft and supple and would make lovely shirts, dresses, or scarves for example, or anything that needed a fabric with a nice drape.

• Camellia: In Japan the camellia flower is called “Tsubaki” and symbolizes the divine. It is often used in religious and sacred ceremonies. It also represents the coming of spring.

• Manji: In South Asia, the manji is omnipresent as a symbol of wealth and good fortune. It is used as a religious symbol in Buddhism, Hinduism and Jainism, which can be traced to pre-modern traditions. In the Sinosphere, countries and regions that were historically influenced by the culture of China, such as Taiwan, Japan, Hong Kong, Korea, Vietnam, Singapore and China itself, the symbol is most commonly associated with Buddhism. They are commonly found in Buddhist temples, religious artifacts, texts related to Buddhism and schools founded by Buddhist religious groups. 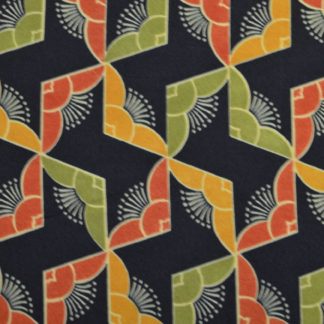