Woven in a superb silver and orange, and faced on the inside with a lovely pure white silk. It is originally intended as a faux-collar for giving the impression of a second under kimono, to add to the general depth and glory of the top kimono… it was held in place by a set of little flat clips that slip in place and hold it remarkably well. It comes with 4 clips, shown in the pictures…

It measures 11.5 cm wide by 128 cm long and is in unused immaculate condition.

This would be suited for the original use of course but it could lend itself to so many other projects.. it is really fine yet retains the distinctive texture of the brocade, so it throws lovely little shadows on itself to add to it’s appeal.

• Date-Eri is a collar which one wears under “Eri” (collar) of the kimono to show as if one wore another kimono under the top kimono.

• Manji: Also called mangi and saaya, buddhist cross in the form of a swastika that stands for good fortune, luck and well being, a symbol of plurality, eternity, abundance, prosperity and long life. It also signifes Buddha’s footprints and the Buddha’s heart. The swastika is said to contain the whole mind of the Buddha and can often be found imprinted on the chest, feet or palms of Buddha images. It is also the first of the 65 auspicious symbols on the footprint of the Buddha. It is often used to mark the beginning of Buddhist texts.

• Saga-Nishiki (佐賀錦 Saga-nishiki) is a form of brocading from Saga prefecture, Japan. It is a unique form of brocading in that Japanese paper is used as the warp. This paper is coated in either gold, silver or lacquer. The weft is a silk thread which is dyed. As the technique is time-consuming, only several inches are produced each day.

• Sayagata:  the swastika is often found as part of a repeating pattern. One common pattern, called sayagata in Japanese, is made of of interlocking manji/swastikas, left- and right-facing swastikas joined by lines. As the negative space between the lines has a distinctive shape, the sayagata pattern is sometimes called the “key fret” motif in English. 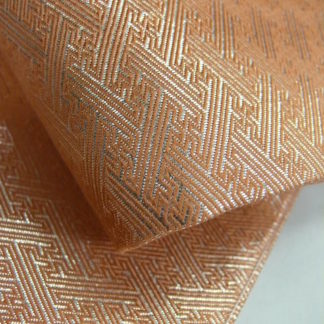